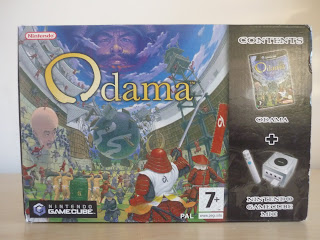 Odama is probably one of the most different games that I’ve ever played and I’ve played plenty of games in my time.

The aim of the game is to control your army whilst protecting a sub-section who is pushing a bell across the battlefield and through the enemy gates, sounds simple enough. Well let me tell you that it’s not that easy and here are the two main reasons why. The first being that the battlefield is actually a pinball table with the ‘Odama’ of the title being a pinball and your main weapon in the game. At the start of each level you fire the ball as high and as far as you can into enemy territory and try to destroy as much of the enemy army and barricades as possible whilst trying to avoid your own army. Just like a pinball table you have flippers at the bottom of the screen with which to hit the ball back up and if you miss you lose.

The second reason is the microphone which is used to command your army. As the game progresses you gain more commands and you have to tell your army what to do with commands such as ‘push forward’ to get the guys with the bell to try and shove through the army. Off what I played I managed to open up push forward, move left, move right, retreat and rally. Rally is used on the second level to rally your troops to pick up and move a ladder which is needed to push the bell up a hill. The main problem with using the microphone is that you also have to press X on the pad at the same time which means you need to let go of the flipper buttons which means that while you are speaking into the microphone your ball is still moving around the screen hitting things and getting nearer to the bottom of the screen. Eventually though with practice it does get a lot easier and if you ever get a chance I would recommend having at least one go of Odama.

Within the 15 minutes: Trying to complete the second level.

Will I play it again? I will actually.

Posted by GameOverYeah at 23:27 2 comments: Links to this post 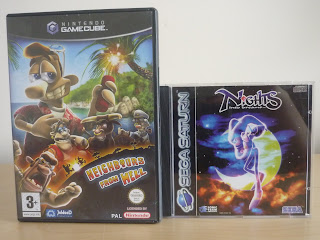 Neighbours from Hell or game from hell? Well it’s not that bad a game but even in just fifteen minutes of play it started to get a little repetitive.

The premise of the game is to go round your neighbour’s house extracting revenge for misdemeanours by playing tricks on him. The tricks involve such tame things as putting a whoopee cushion on his chair or putting superglue on a pair of binoculars to the medium like putting a mousetrap in the mail box to the extreme of tying an iron to the telephone and that’s just on the first couple of levels alone so no idea what it will be like on later levels (maybe dropping a shark into the bath). Each level has four or five tricks that you need to complete to finish the level though you can repeat tricks to gain combos and bonus points. All of this must be done whilst avoiding the neighbour and if he catches you, well you get a nice good beating from him.

Within the 15 minutes: Had completed two of the levels.

Will I play it again? Maybe in short bursts.

I will say straight away that in the time I spent playing it I thoroughly enjoyed NiGHTS and will one day return to it giving it the attention it deserves.

The game is a simple one (well of what I played anyway) where all you have to do is fly around and around the level through rings/hoops collecting black orbs which you the use to kill a large enemy and move onto the next section. Like I say, simple, or it would be if you didn’t have a time limit, the black orbs are very spaced out and when you do come across them there are not that many and finally after you manage to kill the large enemy you still have to get back to the area that you started the level from.

The only small niggle that I had (and it is a small one) was that I kept wanting to move to the background. The game is basically a combination of 2D and 3D game play with 3D graphics. Due to this, at the start anyway, you just go round and round like you are playing in 2D and I sometimes found myself wanting to move to places that I couldn’t. Just a small gripe that I eventually got used to.

Within the 15 minutes: Had reached the first level boss which was section five.

Will I play it again? Yes, was really getting into it.

Posted by GameOverYeah at 22:07 4 comments: Links to this post