Posted by GameOverYeah at 11:44 No comments:

Just the one game completed this month and bar one really annoying thing about the game Kung-Fu Panda turned out to be a short but enjoyable game.

The game loosely follows the film, taking some liberties, but that doesn't distract from a fun and vibrant game with simple controls but moves that you can power up by collecting coins. There are also numerous bonus items to find and the levels are varied enough to not become repetitive.

The only criticism, as briefly mentioned above, is the amount of annoying QTE's which in places can really spoil things, such as the last fight of the game. You take on the final boss in a one on one fight and then at the final hurdle instead of beating him the game flicks to a QTE meaning that you don't get to give him that final punch that he deserves. Apart from that though Kung-Fu Panda is a game worth playing.
Posted by GameOverYeah at 22:50 1 comment: 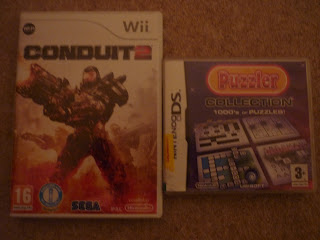 Puzzler Collection I picked up on a whim as I like doing puzzles and I play my DS nearly on a daily basis to and from work so it should pass the time. I bought Conduit 2 as I enjoyed the first one and though I haven't really heard much positive stuff regarding the sequel I would still like to play it.
Posted by GameOverYeah at 18:54 No comments: