Today I received this envelope from katiewhiteart.com containing some lovely goodies. 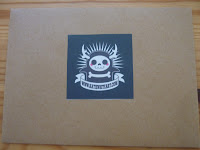 And what lovely goodies they are. 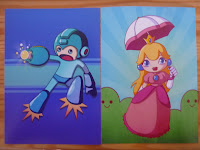 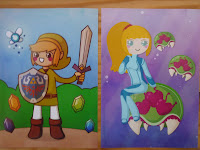 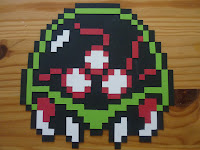 Fantastic are they not?
Posted by GameOverYeah at 22:29 3 comments:

As you can see NERG will be back for it's sophomore year in 2014 and GameOverYeah will again be attending, this time most likely for both days this time round.

Watch out for updates throughout the next year.
Posted by GameOverYeah at 22:35 No comments:

I previously completed the second Ace Attorney game (Justice for All) so knew that I would enjoy playing through the first game and I'm pleased to say that I was right. There are four cases that vary in length and each one is as enjoyable as the last with each case featuring a interesting set of characters who return through out later games. Definitely an enjoyable series.

I didn't know what to expect when it came to Tomb Raider as I had read mixed things about it. I have to admit that I nearly gave up within the first couple of hours due to the numerous cut scenes and QTE's but after being persuaded to stick with it I'm glad that I did. Once I became accustomed to how linear the game was I started to enjoy it and after defeating the final boss was a little disappointed that it was over, the main game that is as I didn't bother with all the little fiddly collectibles.

Finally, a long dream was finally made when, along with a friend, I at last completed the TMNT arcade machine. Thank god for free credits is all that I can say as I will admit that it took a few. After all these years it's still a fantastic game to play.

Posted by GameOverYeah at 14:54 No comments: 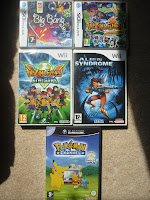 Another nice little haul this month with some there being some good looking stuff.

The two Inazuma Eleven games and Pokemon Channel were from a friend of mine with Pokemon being a very nice and unexpected gift to help finish of my GameCube collection. Big Bang Mini was recommended by the same friend and looks to be a simple but addictive game. Finally, Alien Syndrome was another game picked up on a whim due to a recommendation by a person on the Retro Gamer forum.

Posted by GameOverYeah at 13:45 No comments: