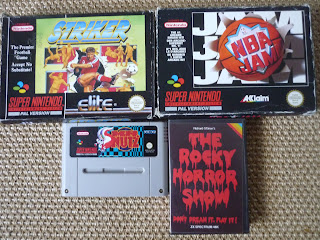 Finally, the last part of the recent pick-ups and this time some retro stuff.

Mr Nutz was a freebie and a game that I'm looking forward to playing whilst Rocky Horror was also a freebie for when I finally find my Spectrum. Striker was a replacement for the copy that I've somehow managed to lose and NBA Jam is a game that I've finally managed to get after playing and enjoying many years ago.


Posted by GameOverYeah at 20:38 No comments: 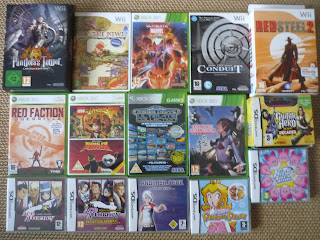 I will say straight off that I was extremely pleased to have picked up most of these games. Pandora's Tower is the gorgeous limited edition (seen here) while Red Steel 2 is the Motion+ limited edition, which was still sealed when I received it.

I've been after Ultimate Marvel vs Capcom 3 for a while now and had never seen it in a shop round here until about five minutes after coming out of the Cinema from watching Avengers Assemble (which was great). The Kirby game was the same, never saw it in any shops so picked it up as soon as I did see it. The two Ace Attorney games means that I've now completed the set so I will have to start playing through them sooner rather than later and I'm pleased to have finally picked up Another Code.

I was happy to have picked up DoDonpachi Resurrection as I missed out on it in the Game sale and it's a game I fancy playing after previously playing DeathSmiles and the three 360 games next to that were all freebies which was really nice.

So like the yesterday a very pleasing set of pick-ups. 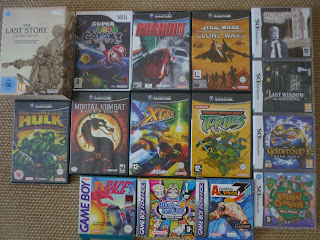 Over the past couple of months I've picked up quite a few games (excluding the Game sale) through buying, trading and freebies. Instead of writing a post everytime something dropped through the letterbox I thought that I would just lump them all together and post every now and then. Saying that though, I've picked up that much that I've decided to split it over three posts over the next couple of days to show off everything.

So for today's post I've put together the oldest stuff, some of which I've since completed, of some Wii, DS, Cube and GB stuff.

As for the rest, The Last Story is a gorgeous boxset (seen here), it was about time that I picked up Mario Galaxy and Hotel Dusk I had been after for a while.

Overall a very pleasing set of pick-ups.
Posted by GameOverYeah at 20:42 1 comment:

A year ago I posted a thread titled Wii Time where I listed the games that I had played on the Wii and for how long I had played them. Well, one year later I decided to take another look to see how things had changed with the list and this is what it now looks like (correct on 11/05/2012)

The top game is still Guitar Hero III but only two hours play has been added to it where as six hours has been added to Guitar Hero: World Tour. Super Mario Galaxy, Kirby's Epic Yarn and The Last Story all appear in the list this time round with some serious hours between them.

There are a couple of more completed games in the list after that but what's interesting are the games that haven't changed like Zack and Wiki. I cannot belive that I haven't played that within in the last year, especially as I still haven't completed it and was enjoying playing it.

The bottom end of the list is games that I've just tested after buying them but I expect at least a couple of them to have moved up the list this time next year.
Posted by GameOverYeah at 19:55 No comments:

10th Anniversary of the GameCube

Four games completed in April, four that I would recommend for different reasons.

Day of Crisis was an interesting game, both brilliant and terrible at the same time. Play it and you will know exactly what I mean. I only know of the character of Astro Boy but I have to say that Omega Factor is an absolutely brilliant game, simple game play but an absorbing story and it's great trying to figure out the clues for the level orders.

Last Window is the sequel to Hotel Dusk (a game that I completed in March) and it's a worthy sequel. I would even go as far as saying that I thought that it was an improvement on the first game as it was faster paced and never let-up, also great for following up on plot threads from the first game.

Finally, I fancied something quick and easy after Last Window so I decided to plump for WarioWare on the GBA. First WarioWare game that I've properly played and good fun it was. Definitely recommend it for a good laugh.

All in all, four completely different games and four that are worth playing.
Posted by GameOverYeah at 23:18 3 comments: