A Youtube user called freddiew has lovingly created a first-person view of the last level of Super Mario Bros. 3 and super it is.

For me the ending against Bowser is fabulous and it's definitely worth 2+ minutes of your time to watch it.
Posted by GameOverYeah at 21:39 No comments:

Just one game completed for the first month of the year and despite it being a great game it left me some what disappointed.

I absolutely love Arkham Asylum and it's easily one of my all-time favourite games but sadly City just left me feeling a bit meh once I'd finished it. The main problem that I had with it was that despite the game being 'bigger' it also felt less structured with the main storyline being rather weak and the game only being beefed out with optional side missions.

With Arkham you felt like every character was there for a reason and everything you did was to get from the beginning to the end of the game. With City you feel more like characters are put into the game because it's a bigger game and therefore they just feel like filler rather than someone you want and need to hunt down.

Like I say, overall it's still a fab game but just not on a par with Arkham Asylum for me.
Posted by GameOverYeah at 19:22 No comments: 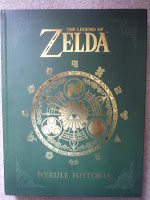 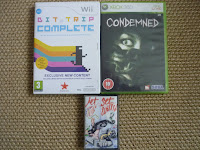 Three games and a book this month.

The Hyrule Historia book I did a post on the other day and I have to say that I'm really pleased with it. Jet Set Willy is a game that many people on the Retro Gamer forum adore and is a game that I've yet to play so when it came up for free I couldn't say no.

Bit.Trip Complete was spotted in a sale in ASDA which I was very surprised at so I picked it up after hearing good things about it and Condemned was picked up on the cheap as well.

Posted by GameOverYeah at 20:21 No comments: