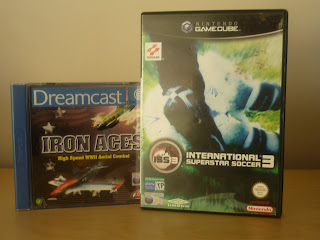 Unfortunately I honestly cannot say anything good about this game which is a real shame as I like many others am a huge fan of the original ISS games.

I have so many criticisms of ISS3 it’s unbelievable; I sadly didn’t like one single thing about it. The controls felt awful, the opposition team got away with everything and anything whilst a slight knock from your player and it’s a yellow or red card. You pass a ball forward to your strikers and their defence is all over it, they pass a ball to their strikers and your defence is nowhere to be seen. Most of the time it feels like the opposition team has about fifteen players on the pitch the amount of space that they seem to cover.

It really is disappointing to not like this game as the SNES versions of ISS were great fun and excellent for a laugh but unfortunately there is nothing fun at all about this version and i’m not surprised that Konami decided to concentrate on the Pro Evolution series.

Within the 15 minutes: Had played one 15 minute match.

Will I play it again? Nope. I own far superior football games.

I’ll start by saying straight away that flight simulation games are probably my least favourite genre when it comes to video games but I was prepared to give Iron Aces the benefit of the doubt and sadly it did little to change my mind.

The main thing that really lets this down is the awful controls. Now I don’t know anything about flying a plane/jet but I imagine that if you slightly moved the controls to move to the left or right you wouldn’t end up going upside down which is what happens in this game. It makes it very difficult to hunt down enemies when even the slightest touch to move means you roll all the way over instead of just moving where you want to be.

All in all with a first mission that just requires you to move east (seriously, what kind of mission is that) and controls that are horrendous to use sadly Iron Aces is not a game that I want to go back and play again.

Within the 15 minutes: On the second mission.

Will I play it again? No. Controls are just too annoying.

Heiankyo Alien is definitely a game that takes you back to when games were simple and could be rather on the hard side.

The premise of the game is that aliens have invaded and to stop them you need to go around digging holes to capture them in. Once an alien is in the hole you then have to cover them up which in all honesty doesn’t seem very humane but hey. It’s obviously a very simple premise but it is actually quite a good game as mentioned previously can be quite tough. Once you get down to the last alien of the level it suddenly speeds up and when it takes about five presses of the button to dig a hole you have to pick your point very carefully. You also get a limit on how long the alien stays in the hole and again when it takes five presses to cover the hole you have to be very quick.

The Game Boy version of the game contains the original game and a new version. The new version has vastly improved graphics but I found this version to be slightly easier than the old version and the graphical update does help a lot as it allows for different layouts to the levels which does make it feel like a different game.

Within the 15 minutes: Level two on old and level four on new.

Will I play it again? Yes in short bursts.

Hellfire is a good old fashioned enjoyable shoot em up with great weapons and the ability to fire in all directions making it an enjoyable game.

If you have played the likes of R-Type and Gradius then you’ll instantly know pretty much everything there is to know about this game. You fly along horizontally in your ship shooting anything and everything that appears on screen including a mini-boss and an end of level boss and progress onto the next level to do it all over again.

What makes this an enjoyable game is the aforementioned ability to shoot in all directions by changing the colour of your ship. Hit a button your ship will turn blue and you’ll be firing in one direction, hit it again and it’ll turn green and you’ll be firing in another direction. It adds skill and tactics to the game as you have to keep changing weapons and directions to kill oncoming enemies and if you die it’s still your fault.

Within the 15 minutes: Level one boss.

Will I play it again? Yes as it’s quite enjoyable.

I’ve never played the first Hitman (and thankfully never seen the film) so with this game I was new to the world of Agent 47.

With a title of Hitman I must admit that I expected the game to be a typical FPS of just running around killing people but how wrong was I. What you in fact get is a game that can be big on stealth or big on running and killing depending on how you want to play the game. I started off by being very stealthy to work my way around the mansion on the first level but eventually ended up killing everyone and I have to say that both ways were fun to play.

Part of the stealth, for the first level at least, was to knock a postman unconscious and dress up in his clothes to bypass security and enter the grounds. Even when dressed as the postman you have to be very careful not to act suspicious as you will easily be rumbled and killed. You cannot for instance run up the path to the gates, you have to walk at a normal pace to avoid suspicion and it can be hard not to run as the path is rather long. You then have to be careful to get to the front door and to enter the mansion which after that is where you decide whether you want to carry on being stealthy or just kill everyone.

Within the 15 minutes: Completed mission one.

Will I play it again? A definite yes.

During the short time that I played this I found the game to be rather frustrating and not enjoyable in the slightest which is a real shame as I love RPG’s and so therefore had high hopes and was severely disappointed.

The main problem with the game was the battle; it was long and frustrating and even had me a little annoyed by the end of the fifteen minutes. It seemed that the enemies got a lot more turns than I did which obviously resulted in a lot more hits which resulted in a few more soldiers dead whilst the enemy ended up with more soldiers resulting in even more turns. Also when it did get round to my turn the majority of my attacks missed for no apparent reason that I could see resulting in yet more frustration and death. I’m not under the impression that every attack should connect but when it seems to only be three out of every ten it does get rather annoying.

Sadly of what I played it didn’t really endear itself to me at all and with the catalogue of RPG’s that the DS currently has it doesn’t seem to be one to rush to play.

Within the 15 minutes: Still on the first battle.

Will I play it again? Maybe at some point in the future.
Posted by GameOverYeah at 19:47 2 comments: