...For the first time in however long I actually played on some arcade machines. 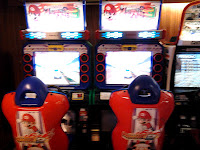 I went out for the day with a friend and spotted a couple of places that had some machines. Managed to play on Time Crisis 4, Terminator: Salvation and a racing game that I cannot remember the name off. I also spotted a Mario Kart machine which sadly I didn't have time to play on.Never before seen a Mario Kart arcade so was a very nice surprise and if I'm down that way again I'm definitely going to have a go.

I also decided to try and win a Mario plush from one of the crane machines, forgetting how slim the chances are of actually winning anything. Still, overall it was nice actually finding and playing on some machines for once.
Posted by GameOverYeah at 22:28 5 comments: 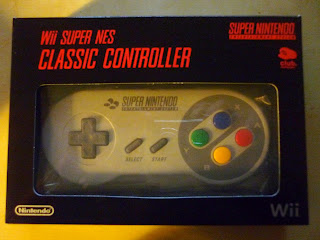 I know I said that I would only do a round-up of my purchases at the end of the month but this one just had to be shared.

Took some stars getting there but a huge thanks to the guys on the Retro Gamer forum for the help and star swaps for making it possible.

Now the big question, do I use or not?
Posted by GameOverYeah at 23:26 8 comments:

Or to give the book it's full title: Arcade Mania! The Turbo-Charged World of Japan's Game Centers. 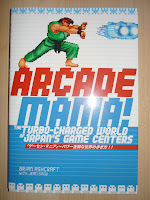 Long-term readers may remember that at Christmas 2011 I took part in the Retro Gamer forum Secret Santa and received the book as a present (seen here). Well, due to time constraints it's only now that I've finally managed to finish it and what an enjoyable book it is.

Covering nine chapters over 190 pages the book is an interesting look at the Japanese gaming market covering such areas as retro gaming, fighting games, cabinets, shooting and rhythm games and also areas such as crane and card-based games and sticker-picture machines.

Covering the likes of Cave, Suda 51, Mahjong, arcade cabinets, sticker machines and much other stuff the book is a very interesting and at times surprising look at the past and present of Japanese gaming, especially for people like myself who haven't had a chance to look at this area. I won't delve too much into it incase people want to read it themselves but I will say that it's definitely worth a read.
Posted by GameOverYeah at 23:07 6 comments:

Did You Know Gaming

Thanks to djcarlos on the Retro Gamer forum for pointing out the following website http://didyouknowgaming.com

Basically it's site that posts interesting and fun facts from the world of gaming though sometimes the facts can be a little disturbing like the two below. 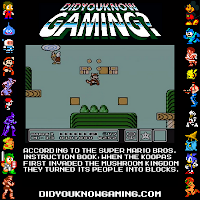 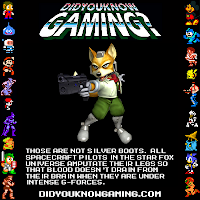 So Mario actually destroys people when headbutting blocks and the characters in Starfox (Wing) have no legs from the knees down. I always thought that Nintendo was supposed to be a family friendly company. :-)

It's an interesting site which updates on a regular basis and is not only good to have a read through when you have a quiet moment but also good for learning new and interesting things from the world of gaming. I would definitely recommend having a wander over.
Posted by GameOverYeah at 22:29 1 comment: 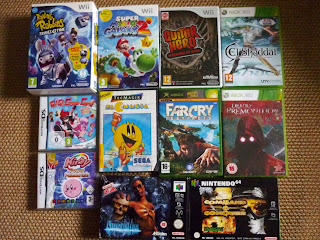 Instead of posting everytime I pick something up, unless it's something like a limited edition or the couple of things that I have arriving in the next few months, I thought that I would just do a round up at the end of every month. Yes, I know I'm already a couple of days behind. :-)

So for June I managed to pick up a few things both old and new.

To cut a long story short for Rabbids and Mario. I traded in a load of DVD's in CEX and after checking the prices online I was offered more than expected. It also turned out that the games scanned through at cheaper than what they were priced at so overall I saved a lot of money on them. Guitar Hero and El Shaddai were picked up on the cheap from HMV which I was pleased about.

Go Go Cosmo Cops was a game that I hadn't heard of before but was ridiculously cheap for a complete game so thought I would pick it up on a whim, Pac-Mania was from the same place.

Deadly Premonition and Kirby were picked up from Game using some of that lovely credit and finally Far Cry, Shadowman and Command and Conquer were charity shop buys.

Not overally spectacular compared to some previous months but still some pleasing purchases.
Posted by GameOverYeah at 21:58 3 comments:

Yes, to try and get a little bit more exposure for this little blog I've only gone and set up a Facebook page. I'll be posting links to new posts but will also be using it other stuff that I wouldn't normally put on here like interesting news and snippets from the gaming world.

I've posted a link on the right of the page and will link it in this post. I hope to see many of you on there so please do say hello.

Without further ado here is the link: https://www.facebook.com/GameOverYeahBlog
Posted by GameOverYeah at 22:34 2 comments:

Another four games 'completed'* this month.

I picked up The Conduit on a whim as I'm not really a fan of FPS games but overall I did really enjoy it. The Wii remote gives it a different feel to using a pad and it's got some interesting weapons. It has it's flaws, a couple of levels for example just have a huge difficulty spike, but overall it's worth giving it a play through.

Whilst UMVC3 is just not as good as MVC2 it is still a really enjoyable game. As per usual the game play is manic, includes mega hit combos and has an interesting character list that includes the like of Nova, Deadpool, Ghost Rider and Rocket Raccoon from the Marvel side and Phoenix Wright, Mike Haggar, Viewtiful Joe and Frank West from the Capcom side.

Guitar Hero: Warriors of Rock was the last core title released in the GH series before it's rest and a huge improvement it was over the previous couple of games. For me personally the setlist is far superior to the World Tour and Five and with a quest mode featuring the voice of Gene Simmons and a battle with a giant robot it's a shame that the series died as it came good again.

The last game of the month was Super Mario Galaxy 2 which like it's predecessor is an amazing game. I personally don't feel that it has the same impact of the first game but with the inclusion of Yoshi, levels being played with Luigi and a host of new galaxies (including one called Throwback Galaxy which is a level from Super Mario 64) SMG2 is definitely a game that you should play.
Posted by GameOverYeah at 12:38 No comments: