Only the one GameCube game this month and a poor one at that. I do actually like the Bond games on the Cube but Rogue Agent was terrible, very long and very repetitive. Followers of my blog will already know about my love of the Zelda franchise and after writing a post about Minish Cap I had to play it again and Twilight Princess after an eleven month break finally got finished and whilst not as strong as some of the earlier games is still a worthwhile addition to the series.
Posted by GameOverYeah at 21:45 No comments:

So today on the Retro Gamer forum in the Wii Collecting Thread people started listing the amount of time that they have spent playing Wii games according to the records collected and stored on the console.

Nearly 90 hours on Guitar Hero III. Now this pretty much was the first game that I ever got for the Wii (I picked it up along with the console, Mario Kart, Sega Superstar Tennis and Wii Play), so it would have a few hours racked up on it and the girlfriend also plays on it but I was still very surprised to see the amount of hours racked up on the game.

Twilight Princess is probably the only one I'm not surprised at as it is/was a very long game and I knew that I had put the hours in but the rest, well all I can think is that I must leave the console on quite a lot when I should be turning it off as there is no way on this earth that I played Red Steel for over 22 hours and still never completed it.
Posted by GameOverYeah at 23:21 2 comments:

So, Saturday gone I was nearing the end of wondering round my local car boot, yet again wondering where all of the retro games had gone, when as I passed one seller I notice under his table a box with the words Commodore Amiga 500 written across it.

Ooooooh, I think, a boxed Commodore Amiga 500, wonder how much he wants for that. Now I've been wanting one of these for years, ever since a friend of mine growing up had one and I thought that this was going to be out of my price range. So I stop for a few minutes to have a think and eventually I dare to head over to ask how much he's wanting for it thinking that he's probably going to ask for a fair bit. So I ask and he tells me that he's looking for £12 for it, I be cheeky and ask if he'll take a tenner and he answers yes as he just wants rid of it.

I pick up the machine and behind it is two boxes of games which the seller tells me is included in the price, sweet. So for £10 I walked away with the following boxes: 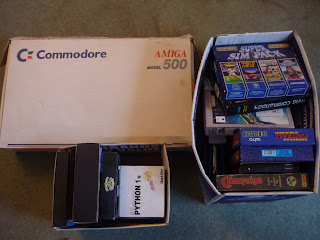 I then had to go out on Saturday so didn't actually get to test the machine until the next day and very happily I can report that it worked perfectly fine. After testing it I unpacked everything that was in the two boxes of games to find the following: 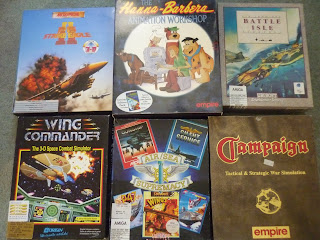 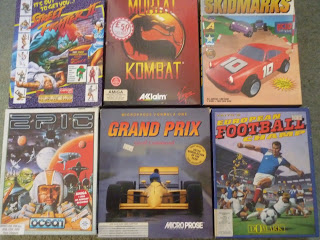 Everything is in great condition and all the ones I looked through contained the disks and the instructions and Street Fighter II worked fine, though it took some getting used to after only playing it on consoles all these years. I also gave Captain Planet a whirl just because it was Captain Planet (it wasn't that great a game).

So all in all I am now one very happy chappy, very pleased to finally pick up something I've been wanting for years and especially as it looks like I picked up a very good bargain and it certainly makes up for the last three/four weeks of wandering round the same car boot and picking up absolutely nothing in the way of retro gaming.
Posted by GameOverYeah at 22:56 3 comments: